This 1 Tip Will Make You Hilarious!

I don’t exactly class myself as a comedy magician.

Never have done, doubt I ever will do.

That said, I do scatter entertaining “bits of business” into my act and some stock lines which keep things fun.

It’s not that I particularly agree with the “you’re an entertainer first, magician second” analogy.

I absolutely understand why some people would be in that camp – but I think magic has too much inherently going for it to play second fiddle to anything else. Magic is unique and should be respected. That’s just my opinion.

Trivialising the magic is the last thing I want to do. 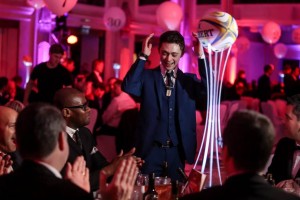 Ultimately, though, I want everyone to have a great time.

And you should, too!

Everyone wants to laugh. And magic is an ideal vehicle for a touch of comedy.

I’m learning constantly and, if I can share some of my lessons with others too, I feel that can only be beneficial for all of us.

Here’s something you can do straight away to make your magic funnier:

I was at a gig a few days ago and something happened.

We all have those moments where we surprise ourselves, blurt something out in the moment and it goes down a storm.

Everyone bursts out laughing and you feel like a comedy God.

Battling admirably to not laugh at your own joke, you are shocked!

It seemed to come from nowhere!

But, at the right moment, the comment arose and it was bang on the money.

There’s that painful little millisecond that seems to last for an eternity, where you’re unsure whether the joke is going to hit. Then, the tension is released and the laughter ensues. You’ve nailed it.

Yes, admittedly… there are times when you mumble a joke and it goes down like a lead balloon. But let’s not dwell on those.

Anyway at this gig, if I do say so myself, I was on form.

And the laughter was flowing. Banter-iffic.

And I said something hilarious.

It was topical, sharp and deftly witty. It practically emerged from my chops without pause for thought, or a moment of contemplation.

The crowd erupted like a volcano, shrieking with voracious laughter so uncontrollable they had the whole room turning their heads.

We had a fabulous time.

When that genius joke pops up from thin air, REMEMBER IT!

After the gig or performance, actually take the time to write it down so you can use it again in the future.

Otherwise, you’ll most likely forget it.

You can make a note on your phone or a notepad.

To this day, I still write a little journal after every gig and I put it in there.

I’ve been doing this recently and it’s added some extra funny moments to my performance that I’m really pleased with!

The main joke to come from this recent gig is now firmly among my repertoire of funny asides.

The difficulty now is making the joke sound fresh again.

Anyone can recite a canned line from memory – but there’s an art in making it seem like it wasn’t just that: a canned line recited from your head.

It has to seem every bit as spontaneous as the very first time it emerged from nowhere.

I like to do this by “remembering to forget”.

This means that, no matter how much I practice my script or lines, I go into a performance with almost a blank mind.

Present to the moment, I try to let any lines or patter arise as if it had popped into my head that instant.

This is easier said than done and sounds rather bizarre. I’m certainly not perfect at it, but I’m always looking to get better!

It becomes harder and harder to do the longer you’re using a particular joke or gag for, as your delivery tends to become tired and mechanical with the repetition. It’s in this instance where you need to put in that extra conscious effort to hit the right note and keep it fresh.

You’ll find your mind trying to hand everything over to your “subconscious” and you’ll be just going through the motions.

Go the extra mile to avoid this and always log your moments of comedy genius. You’ll have your audience in stitches.

Well, I’ll laugh… even if no one else does.

Ha, I hope this helps!

And, of course, if you have an questions, just drop me a line at luca@lucagallone.com. 😉