How to Open Flawlessly, Every Time

One of the questions I get asked ALL THE TIME by magicians is how to “how do I approach people to perform magic?”

Or, more specifically, “what do I say?”

So, I thought I’d take this opportunity to address this right now so you know EXACTLY how to work in the best way for you.

After literally, I suppose, thousands of approaches, it’s something I’ve refined to its simplest and most effective form.

Especially when starting out, magicians young and old may feel a gut-wrenching twist in the stomach at the thought of cold approaching a group of people. I know I did.

Why do we feel this way?

Well, it’s probably due to a pre-ancestral instinct which is telling you that encroaching on an unknown tribe could be fatal and, if they’re the wrong people, you could DIE.

Clearly, this fear is entirely inappropriate and unnecessary for modern day society, but our biological hard-wiring was not built for such comforts 40,000 years ago.

Especially when we’re only poling up with the largely harmless offer of magic tricks and related paraphernalia.

In reality, this translates to a fear of rejection and ridicule that, we all know from experience rarely, if ever, comes to pass.

Yet our mind still tricks us!

It’s about learning to overwhelm your thinking mind with action.

With all of that said, here’s three things to remember when approaching people to perform magic: 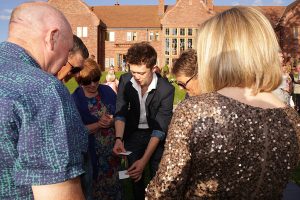 COOL. So now you know that A LOT of the time you approach people and say, “I’m a magician”, their reaction will be an enthusiastic “Oooooh!” coupled with a raised eyebrow and a curious smirk, we can get onto how to walk up to a group.

When you first start performing, make it a habit to engage the first group you see, the first set that enters your line of vision.

I find weighing up who looks the friendliest, or most open to it, or easiest to approach only puts you in your head.

Just decide to jump in before the excuses pop into your head. Pick a group and approach.

Distract your thinking mind and go – don’t hesitate. Enter with conviction and assertion, stemming from the firmly ingrained BELIEF that what you’re offering is cool, awesome and of immense value.

I feel some magicians feel almost a tinge of embarrassment that they’re a grown man performing tricks. I get it, but I’ve also seen guys with who just own it and it seems the coolest thing in the world. 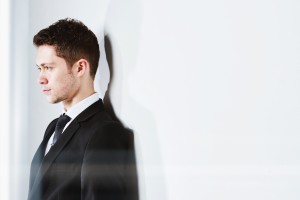 Look… I’m psyching myself up for the big approach.

Stop mulling and remove time from the equation.

For the record, I rarely ask if it’s OK for me to show them some magic. I tried this and it felt like there was a glass wall between me and them before they granted magic boy permission to entertain them. It’s very permission seeking and I want to be in control.

They get very little say in it!

If I do ask, I ask whilst 100% assuming they’ll say yes and with a fun vibe. They always say yes.

Right, you’ve managed to approach the group. Congratulations. Now for the holy grail.

What’s that ONE THING you can say that blows the set right open?

Well, I’m going to let you into a secret…

It doesn’t matter what you say.

Let me say that again… IT DOESN’T MATTER WHAT YOU SAY.

It’s in the VIBE behind it.

It could be something as dull as “Hey, I’m Luca” (of course, do insert your own name, saying your name is Luca would be weird).

But it’s in the deeper layer of the communication, not the surface layer words.

You want the vibe to be fun and friendly.

However, despite me saying this, I know a few of you may want some “canned” openers to free up your mental ram, so here’s one:

Or, here’s a few facetious ones, delivered to best effect in a playful manner:

The latter two are great to throw in from time-to-time to kick off some lighthearted banter.

OK. So we know we’re offering shed loads of value, we’re cutting out the overthinking and jumping straight in with conviction, we’re introducing ourselves in a charming, fun manner that makes us almost instantly likeable to the group and NOW… we face the age old argument of how to start the magic.

One school of thought will argue that you should keep introductions down to a bare minimum, engage one or two people from the group with a very quick, visual trick to capture attention and hook people in. Then, after you’ve pulled off that first effect, you should engage with the entire group properly, meeting everybody and introducing yourself.

Another angle, first introduced to me by Derren Brown in his exceptional book, Absolute Magic, is that that when you first approach a group, for this first few moments they are not interested in any tricks that you may perform. They are interested in YOU and are making judgements on you and your persona from the get-go, before they can really consider what magical wonders you’ll conjure up.

Derren would be very charming (as always), shake everybody’s hand and engineer a sense of intrigue that hooked his audience in before any magic commenced – building up an anticipation and excitement for what they were about to witness.

I personally believe they’re both valid and have a place. It is all personal preference.

Ultimately, I tend to lean towards Derren’s approach, or use a mixture of both.

I feel if I perform anything without really introducing myself properly and meeting some members of my audience, I’m selling myself short.

Following the introduction, I often do go straight into traditionally quick opener, such as Extreme Burn. Yet, other times, when I feel the time is right, I’ll withhold performing that bit longer, as I build up some degree of anticipation and healthy intrigue, before launching into a longer routine without such an instant moment of magic.

So, I hope this covers most of how to dramatically improve your success in approaching groups! It’s quite a lot of information I’ve thrown at you so, if you have any questions, email me at luca@lucagallone.com.